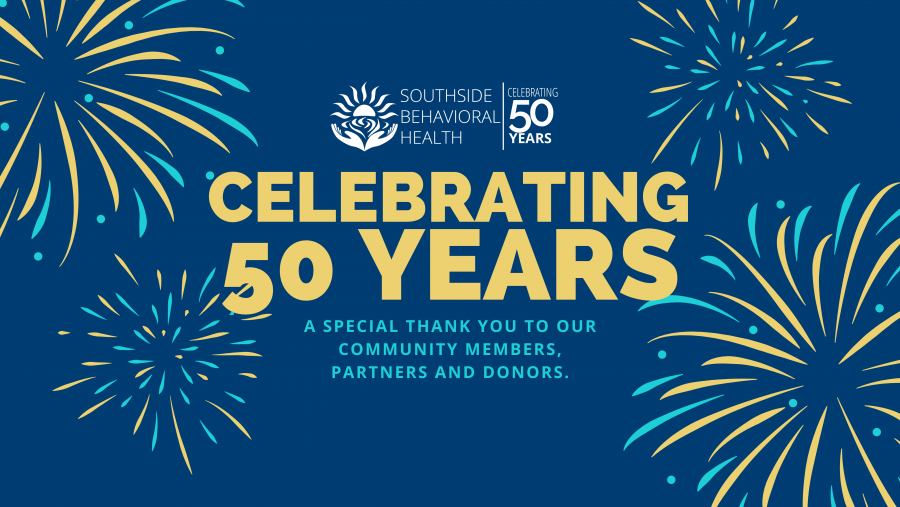 BRUNSWICK, MECKLENBURG, & HALIFAX, VIRGINIA – Southside Behavioral Health (SBH) is celebrating the 50th anniversary of its founding in 1972. In celebration of its achievements, SBH will host a series of exciting events throughout the year in an effort to share its milestones and challenges of the last 50 years with community members.

“Over the last 50 years, mental health has become an important topic in our homes and local communities and we are proud to be part of that conversation, said SBH Executive Director Elizabeth Engelhorn. “There are still many challenges ahead, but our future is bright.”

In 1972, Southside Community Services Board was formed, later known as Southside Behavioral Health, with the intent of improving local health outcomes in Southside Virginia. At the time, the largest challenges faced by the mental health sector were building services in the community to support individuals with intellectual disabilities

From the early days of the organization, Southside Behavioral Health’s objectives have emphasized quality service, customized care, and continual improvement. Today, the organization maintains those same ideals with more than 17 facilities and 200 employees spread out across the counties of Brunswick, Mecklenburg, and Halifax.

The goals of SBH include advocating for mental health rights, developing quality standards for care, sponsoring research into local health factors, representing the interests of minority and at-risk populations in local legislative/regulatory issues, and providing educational programs for community members. Throughout the years, SBH has continually developed its programs and services to meet the needs of an ever-changing and expanding community.

A Golden Year of Celebrations

As SBH kicks off its 50th year, the organization invites community members to recognize all that it has accomplished with their help over the last half-century and to look forward to future opportunities with several exciting events:

“We are proud of the achievements we’ve made and look forward to the next 50 years of accomplishments,” said Engelhorn. “We’ve seen a lot of changes over the years, but the most important thing remains the same and that’s our dedication to the communities we serve.”